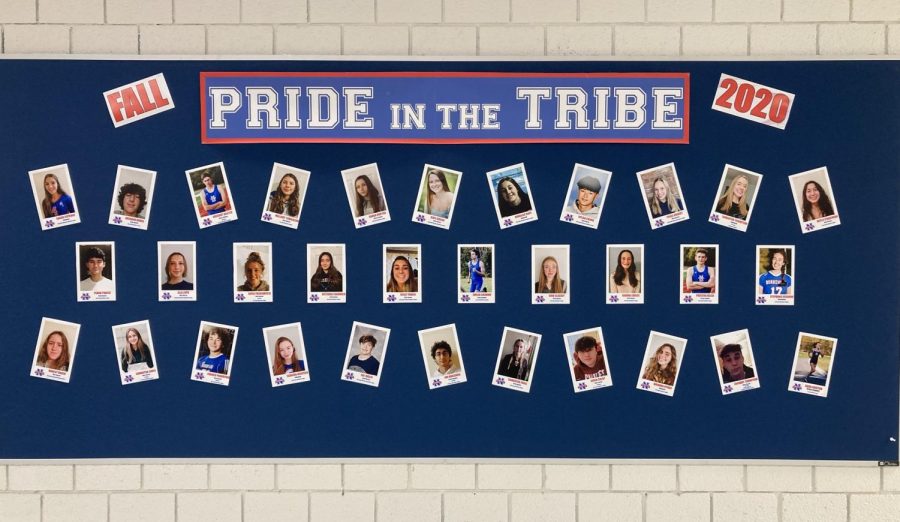 The bulletin board outside Nonnewaug's gym recognizes the student-athletes who earned fall postseason honors.

WOODBURY — As the start Connecticut high school winter sports looms closer, the fall season seems to be all but a memory to Nonnewaug students, parents, and staff. However, that memory is one that all will remember for a long time.

The 2020-21 fall sports season for Connecticut teams, coaches, and athletes was one that will be like no other. Cancelling and rescheduling games, social distancing and wearing masks on the sidelines, and playing every practice and every game with the uncertainty of the season coming to a quick end were some of the many challenges that teams had to face.

Despite these challenges, Nonnewaug athletes were able to persevere through them all. As these athletes played their hearts out, their accomplishments were awarded at the Berkshire League, state, and even New England level.

For the boys soccer team, Zach Thompson, Franco Pannofino, Aiden Colby, and Brendan Burke made first-team All-BL, with Jon Khazzaka and Pedro Prates making second-team All-BL, and Dylan Chung being named an honorable mention goalie. In addition, Thompson, Pannofino, and Colby made the All-State team, and Thompson was also selected to the All-New England team.

On the cross country teams, Gregory Bastek was named first-team All-BL, as well as the All-State team, with second-team honors being awarded to Emilio Calvano, Sara Norton, and Preston DeLeo.

With so many Chiefs being named to such achievements, it attests to how badly these athletes wanted to perform for the betterment of their teams. These recognitions show how much emphasis is put into Nonnewaug athletics, with great coaching staffs and overall team chemistry.

Overall, with the possible winter season approaching, the Chiefs will look to continue their momentum in boys and girls basketball, gymnastics, and swimming (wrestling has been ruled out, and the co-op ice hockey team will not play this winter).