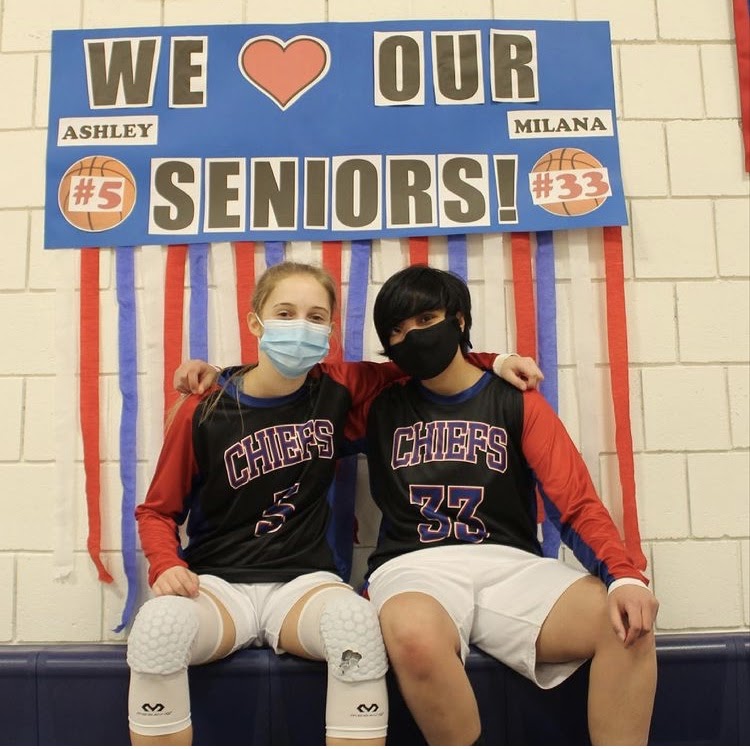 Seniors Ashley Henessey (#5) and Milana Jaffin (#33) gather in front of one of their many senior night posters.

WOODBURY– Nonnewaug High School seniors Ashley Hennessey (#5) and Milana Jaffin (#33) were recognized for their hard work and dedication to the girls basketball team during the team’s senior night game on Friday, March 12.

Senior night, a long-standing NHS tradition, is an opportunity to honor the senior players on the team during the final game of the regular season. Hennessey and Jaffin received speeches from players and coaches, were escorted onto the court by their parents, and received going away gifts.

“Honestly, I didn’t think there was going to be a season, let alone a senior night. The team planned such an incredible senior night, and I wouldn’t have felt special if it weren’t for them,” stated Hennessey.

Hennessey has been a part of the basketball team for 4 years and has started varsity every year. She has been a big asset to the team and was even recognized this season as one of “The Top 25 CIAC Players to Watch Out For”.

Jaffin, who has been a part of the team all 4 years, also started in the senior night game.

“I wasn’t sure if I was gonna get a season this year because of Covid. When I found out that we would get to play this year, I got really excited because it would be the last chance I would get to play for the Chiefs,” said Jaffin.

Before the match up against the Warriors, Henessey and Jaffin received recognition from Coach Brutting, who has been their head coach for all 4 years at Nonnewaug.

“For the team, we have something called the Chief Heart.  It is a ball that is awarded to someone on the team at the end of the game because their ‘Chief Heart’ was clearly on display that day. … For the last four years, both Milana and Ashley have put their Chief Hearts into everything they possibly could for the team.  Although they did it in their own unique way, each of them has left their own legacy on the program,” said Coach Brutting.

The support of Coach Brutting and the whole Nonnewaug team has helped the senior players become who they are today.

“Coach Brutting and Coach Denman always taught us how important it is to act as a team and not as individuals, both on and off the court. My teammates are very supportive of each other,” said Jaffin.

“Everyone has bad practice days and the team encourages each other to keep trying and to improve. We all have a ‘chief sister’ that supports us … ,” Jaffin concluded.

Hennessey added, “my teammates and coaches are my biggest supporters [and] the best people to take advice from. These last 4 years playing for Nonnewaug have been unforgettable because of how well the team comes together.”

Both seniors will be missed on and off the court, and both girls will miss playing with the team. Hennessey doesn’t have any set plans about playing in college, but she doesn’t think there will ever be a day when she’s not playing basketball.

The team went out strong and won their senior night game against the Wamogo Warriors. The team is now preparing for the Berkshire League Tournament with a number 2 ranking. The tournament began on March 18 against Terryville.